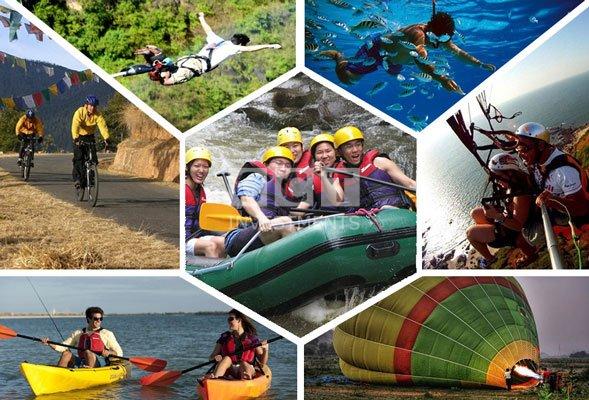 6 Exciting Sports To Do in Turkey

Many of the tourists coming to Turkey like sports tourism, which contains fun excitement and lots of adventure, so they can spend more fun activity holidays, for those  sport-loving tourists who are looking for such places of adventure and excitement in Turkey. We will guide you through the most important tourism places of fun and exciting sports in Turkey; of these places we point out the following:

You can practice this sport in (Oludeniz) neighborhood in Fethiye the most famous tourist area in Turkey, which is located in Mugla overlooking the Mediterranean Sea placed in the south-western Turkey. The practice of this sport are appropriate and very enjoyable between April, May and November. There are several stations with a different heights to jump from, the height of the first level is about 1700 meters, and the second one is about 1800 meters, and the third is about 1,900 meters. Jumping area is characterized by green breathtaking picturesque surrounding, as Fethiye coast can be seen during the jump. Next to this region you can find (Pamukkale) area in Denizli city near Mugla city. This region is characterized by its bright white color which looks like cotton caused by water bubbles resulting from hot water waterfalls flowing from the high mountains, you can see the beauty while jumping through the air from the jumping station, which has a height of 700 meters.

A very enjoyable Sport, but you need a strong heart of adventure and excitement lovers. You can practice this sport Securely in Turkey in Aksu area in Antalya. This trip lasts half an hour in the air, and there is an emergency parachute on the passenger back to ensure his security life.

The airship exploration is also a sensational sport, you can ride the airship and explore Cappadocia area in the famous city niff. In addition to the excitement had by the visitors after riding the airship, there are also lots of fun and exciting historic exploring of the architectural treasures of Cappadocia region where tourist can have, buildings are characterized as being carved on the rocks of the mountains.

Single rowing Sport is practiced by professional by conflicting with waves of the sea. There are several places suitable for practicing this sport in Turkey, such as: Alaçatı in Izmir, Aksu, columbus, Cash in Antalya, Didim in Izmir, Mudanya in Bursa and Milas in Mugla

Which called in English and Turkish as Rafting sport, a sport done by several people riding in parallel small boat rowing between the arms of the rivers and seas by conflicting waves and water flowing from high waterfalls. The sport can be practice in several regions in Turkey, from within these areas we mention Ardaşan in Rize city, Ala Tcati in Izmir, Cash in Antalya, Wardak and Odramat in Balikesir, fuca and marine Valley in Antalya.

Diving is the most beautiful and exciting sport, it also has a special exploratory side allowing its practitioners to watch a lot of marine life directly. There are several beautiful and charming places can be suitable for diving activities, and can some of these places stated as follows: Kamar and Valzlar and cave-Gook that half of it is located in the water and the other half on Antalya land, Ayvalik in Balikesir, Marmaris, Bodrum and Fethiye in Mugla, Saros and Gokja Ada in Jnak kale and Dhana adasi in Mersin.