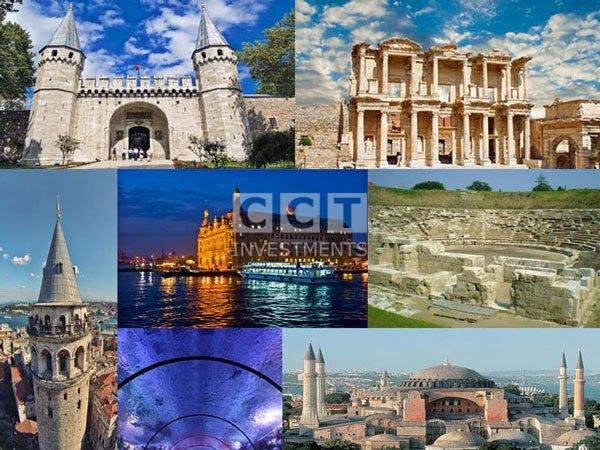 At the beginning we thought that Turkey is only the best place for a holiday on the beach or relaxing near swimming pools, but in reality, Turkey is a country of a great civilization that left behind a decent number of architectural arts.

The following topics identify the most 7 prominent landmarks Attract attention to Turkey:

Haydarpaşa Train Station is one of the most beautiful buildings in Turkey, it was completed in 1909 by a company called Anadol. Railway which hired two creative German architects “Helmut kun” and “Otto Ritter,” where they chose a classical type building this station. Construction began in 1906 and ended in 1909.

In 1479 and by the order of Sultan Mehmet Elfatih, Topkapi Palace was constructed, which was until the mid-nineteenth century, the headquarters of the Turkish leaders. The palace was built on a site of old buildings, which were built during the reign of the Byzantine Empire, on the shore of the Sea of Marmara. Currently, the palace is one of the most important museums in the world.

The ancient city of Vassilis:

If you plan to visit Kemer City in south of Turkey, it is adviced to rent a bicycle or car and go to the old Vassilis, located 15 kilometers from the city, and thanks to this trip you will have the opportunity to discover Turkey and its interesting and wonderful places . Vassilis city was founded in the seventh century BC by colonists who came from Rhodes Island. The town lies at the foot of Mount Olympus, described by Homer in the Iliad.

It is an important tourist attraction factor occurred in Konyaalti, and one of the largest aquariums in the world. The journey starts during the aquarium with independent aquariums with different types of fish and then an underwater tunnel with a length of 131 meters, which is one of the most exciting places you will ever see.

It is one of the oldest monuments in Istanbul. The tower, which was built in the fourteenth century with a height of 61 meters, is located on a natural hill, so you can view it from anywhere in Istanbul.

Aya Sophia is the best example of the splendor Byzantine architecture, and a symbol of the former Byzantine greatness. Originally, the cathedral was constructed as a church, but in the fifteenth century, the cathedral turned into a mosque for Muslims following the opening of Istanbul by Sultan “Mehmet the Conqueror.” At present, it is of the most prestigious museums in the world. The cathedral was build, according to the decision of Byzantine Emperor Justinian, who wanted to be a reflection of the authority, power and wealth in the Byzantine Empire.