Bursa  province, which lies in northwest Turkey, one of the most important in Turkey’s provinces, from the well-known industrial cities, and the fourth-largest percentage of the population in the country, which is also one of the famous tourist cities that tourists flock to it from all the countries of the world.

And that the most famous places in the city of Bursa are as follows:

Located at the beginning of the famous Uludag Mountain, not far from the city center of Bursa only ten minutes away by car.

It’s a huge tree, and one of the oldest trees in Turkey, and display the trunk which ranges from two to three meters, and have big branches, the width of each branch is like a full tree.

The age of this great tree, as recorded is 600 years, which is why it has become a symbol of popular symbols of the city, and tourists are eager to see it. There is under the tree a nice cafe with great views of the city, and there is a restaurant serving various types of delicious grilled food.

It is old covered market, one of the most beautiful markets in Turkey. Founded in 1490 AD by the “Bayazid II” strikethrough yard wide, and next to it there is also a small hotel and a mosque.

And it display of luxurious and wonderful silk fabrics and that you can bargain on the price to get a unique product at a good price.

Zafer Plaza officially opened in 1996, and is considered the most famous shopping center in the city of Bursa , also known as “pyramid complex” and that’s because the glass architecture is similar to the Hall of the Louvre in Paris, perhaps oddly shaped, which allows sunlight access from each side It makes it truly an architectural masterpiece worth a visit.

The Center consists of three floors, and includes more than a hundred stores, which you can find many famous domestic and international brands as well as restaurants, outstanding cafes, cinemas. 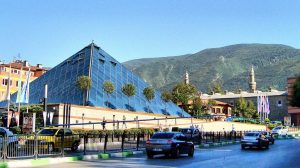 It is part of a large group of buildings located in the eastern side of the city of Bursa, which was the capital of the Ottoman Empire before the conquest of Constantinople by 1453, and these buildings are composed of a mosque and a shrine and a school, a kitchen and public bath. The mosque is a wonderful blend of architecture and decorative art, was ordered built by the Ottoman Sultan Mehmed I, and ended in the month of January in 1420, the mosque was renovated completely in subsequent years by the Ottomans. 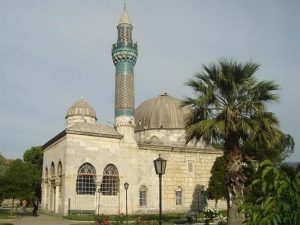 Luna Park is located near the city center in a wonderful national park, it’s the perfect place for family trips with children, where there are electronic games to suit all ages, and the intervention of joy in the hearts of everyone. 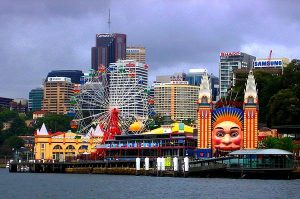