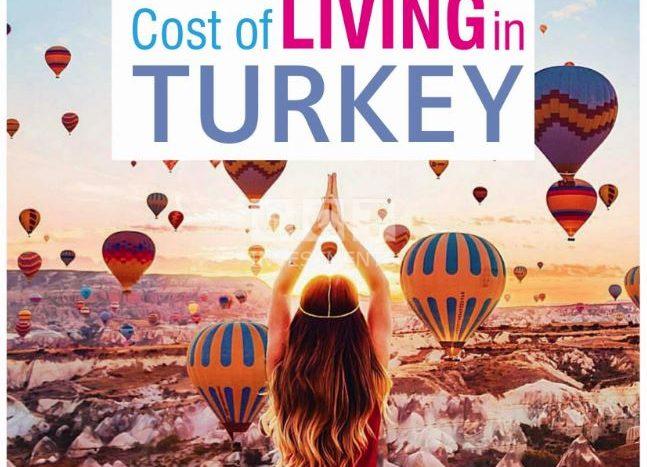 Cost of Living in Turkey

Certainly, the cost of living in Turkey is an important factor in the decision of arrivals to determine whether they can move here permanently.

Turkey is an amazingly cheap place to live. There are some important factors to consider before we begin with an average cost study.

The minimum wage in Turkey is 2324 liras per month with the employer paying all health and retirement premiums known as SGK, as this income can cover the needs and basics of life for one person with rent very appropriately.

Cost of Living According to Regional Differences

The cost of living in Turkey varies from city to city, just like anywhere else in the world. And Istanbul is the most expensive city in Turkey, where Istanbul is the center of financial and commercial business in addition to tourism and economy. Also, the daily life costs of food, drink, transport, shopping, and nightlife are high and expensive, in addition to high rents houses. It requires the family that does not pay rent or mortgage approximately 6845 TL to live a good standard of living.

Where in the cities on the coasts of the Aegean and the Mediterranean, you will find that the cost of living has decreased dramatically. In Fethiye, where the cost is 20% less than the cost in Istanbul, if the couple owns a house there, they can lead an average life of 3000 TL per month.

Below we will calculate some of the cost of living in Turkey:

After you are over 90 days in Turkey, you must obtain a residence permit to stay in Turkey, and you will need mandatory health care if you are under 65 years of age. For example: The cost of obtaining a one-year residence permit with health insurance for a couple is about 7,000 TL per year.

Driving and Maintenance of Vehicles

Although the cost of gasoline is not as high as other European countries such as Greece or Portugal, it is still twice the cost of the United States and Russia. For this reason, many Turks drive lower-cost diesel cars. Also, car owners allocate approximately 5,000 liras annually to cover expenses such as MOT, insurance and repairs.

Turkey has imposed higher taxes on alcohol and tobacco for the past five years, which have had a significant impact on an individual’s budget. If we calculate the expense of anyone who smokes one pack of cigarettes per day and drinks one cup of alcohol, the expense will be the equivalent of 900 to 1,000 pounds per month depending on the brand.

Living bills in Turkey are exceptionally cheap. As you do not have to buy a license for television stations as other countries, also in some areas far from Istanbul and major cities, the rent can reach 700 pounds per month.

In most homes, gas is purchased in cylinders from local shops, where the cost of a large cylinder is equivalent to 120 pounds and can last for about a year.

Electricity: An average of 250 pounds per month, but this can be reduced significantly by reducing the use of air conditioning.

Water and sewage: an average of 40 liras per month

Compound maintenance: 100 to 500 liras per month, depending on the services provided.

Municipal tax: 200 liras per year depending on the title deeds and the property price

Insurance: Deprem seismic insurance in Turkey is compulsory. The cost ranges from 150 to 250 pounds, and the cost depends on where the property is purchased and its size. Fire and theft damage can also be covered optionally.

Telephone, Internet and satellite TV: There is a great competition between the telecom and entertainment companies in Turkey for the prices, which offers a group of great deals in this field. For example, Turk Telekom offers unlimited internet, phone calls and TV channel packages offering English and Turkish channels for only 130 liras per month.