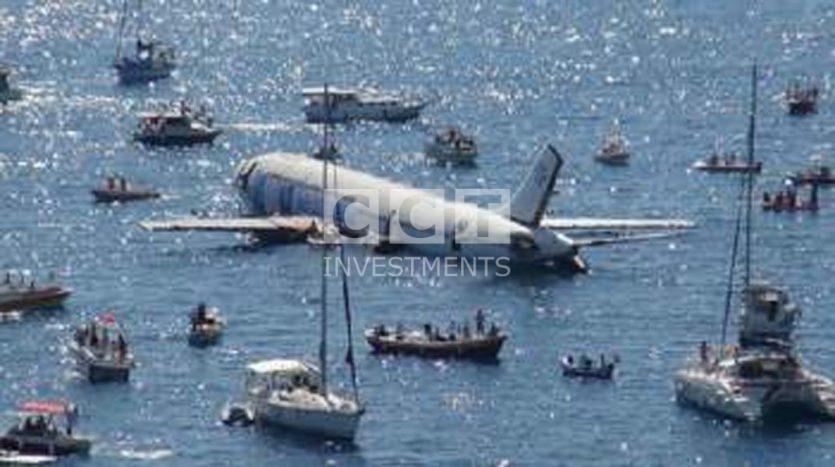 Dumping a Plane for Tourism

Turkish authorities have flooded a plane type Airbus A300 in order to stimulate and encourage diving tourism, this was done in the Aegean Sea in front of Kusadasi tourist resort. Diving tourism is a primary partition in Turkey’s economy, which has seen some decline because of the processes that the country experienced from time to time.

The plane was dismantled in Istanbul on 7th of April, and two months after the plane was transferred to Guzel Camii region carried by five trailers

The length of the plane is 54 meters and the width of its wingspan is 44 meters. The plane was placed on the surface of the water in front of Kusadasi resort in the province of Aydin and then it sank to the bottom of the sea on Saturday evening.

Turkish authorities bought the plane which is 36 year-old from a private company with price of 270 thousand Turkish liras, equivalent to around 93 thousand dollars. Hundreds of people have watched dumping the plane, which lasted for almost two hours.

During the dumping process of the fuselage, it linked to some parts of the plane with balloons and lowered with the help of divers to a depth of 20-25 meters.

The governor of Aydin has explained that the goal of this project is to increase the biological diversity on Kusadasi Coast and the development of diving underwater tourism in the region, and he added that he is expecting visiting of 250 thousand foreign tourists to practice diving annually.

Prior to this event by dumping three small planes in the state of Antalya in south of Turkey and in the towns of Kas and Kemer in 2009 and also in Düzce Province of northwestern Turkey. But the plane Airbus A300 is the largest plane used as artificial nautical reefs.