In December, Eurasia tunnel will enter into the service, which so far the construction has completed of 85% of it, and that is according to the announcements of the Minister of Transport and Communications and Maritime Navigation Ahmet Arslan.

The Tunnel extends 5.4 kilometers under the sea, and connect the Asian and European sides of Istanbul with a highway. 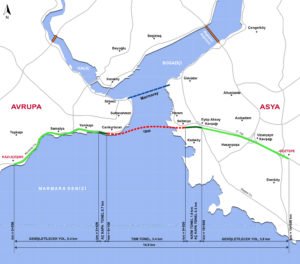 The deepest point in the tunnel reach to a depth of 106.4 meters. Where the highway that connects both sides of Istanbul will serve Kazlıçeşme – Göztepe Street who suffers from traffic crisis permanently. And thus Eurasia tunnel will contribute to decrease the suffocating traffic jams in Istanbul.

The minister also explained that the section that extends under the sea, which amounts to 5.4 kilometers out of the total extension of the project 14.6 kilometers, will be two layers under the sea. By the end of this huge project will shorten the time of cutting the distance between these two points from 100 minutes to 15 minutes.

The tunnel is designed so that it can withstand an earthquake measuring up to 7.5 on the Richter, and also it is supported with two flexible systems in order to remove ground difference between both the European and the Asian side. 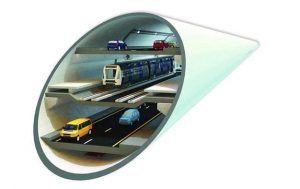 Tunnel will be in the service on 24 hours a day, 7 days a week. The drivers will be able to cross it and that by paying about 5 $ per vehicle through electronic payment systems HGS and OGS .Private companies will work on the project which its investment value worth 1245 billion for 29 years .

Dumping a Plane for Tourism
Britain Out of The European Union ?