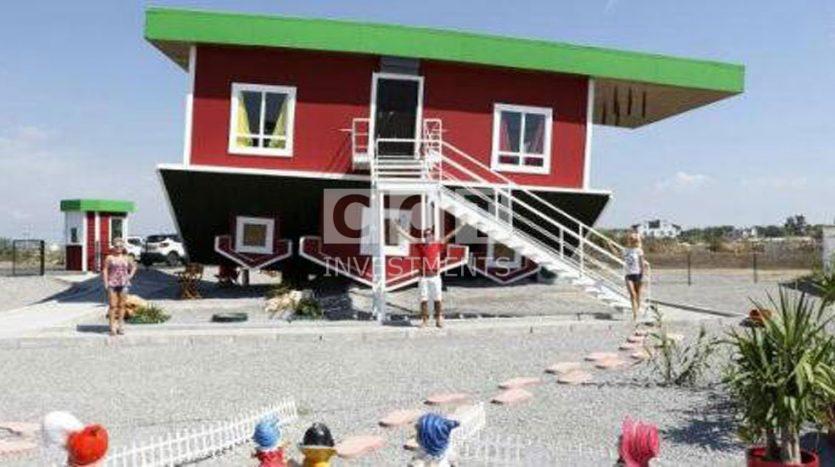 Did you try to live in your house upside down? To walk on the ceiling, for example? Or to cook food and you’re hanging on the ceiling of your house? These questions may seem a bit strange, but you can actually apply them in Antalya city when you visit the inverted home.

You can experience on living this way, even by default in the Inverted House, which provides the opportunity for its visitors to live this unique experience of its kind.

On the initiative of some businessmen in Turkey an inverted house was opened in Antalya in last January, which is the first house of its kind in Turkey and the thirteenth in the world.

The inverted house is characterized by basing on its pointy roof on the ground and its base hanging in the air, which may cause you some dizziness when you enter it, and inside you’ll see all the household items and furniture has been hung from the ceiling, which takes the shape of the floor of the house.

The responsible for managing the inverted house Kaan Karahan says that the house has a big interest from visitors as since it opened to this day it has received about 30 thousand visitors.

Visitors enjoy taking some funny pictures as they are dealing with home devices hanging from the ceiling and then they reverse the pictures to appear as if they were practicing their lives upside down.

The inverted home receives visitors from various places including a lot of photography enthusiasts who take many professional and funny pictures and also many brides are visiting this house to capture distinctive photographs of their wedding.

It is worth mentioning that the inverted house was not affected by the tourism crisis that occurred some time ago and the city suffered from it where the expected number of visitors to the house number has exceeded since it has opened till this day.

In 2017 the inverted house management aims to receive 60 thousand visitors also aims to build similar houses in all the big cities of Turkey, starting from Izmir.