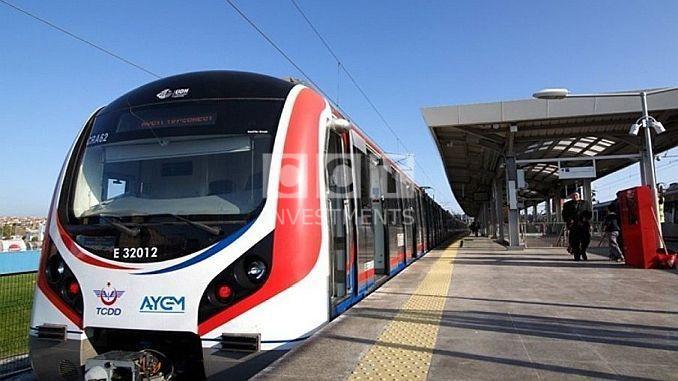 The Gebzi-Halkali train line is 76.6 kilometers long, after the introduction of the 13.6-kilometer Marmaray line which is linking the Asian and European sides of Istanbul. The Infrastructure Investments General Directorate of the Transport and Infrastructure Ministry completed the opening of the remaining 63 kilometers, as a result, the journey from end to end is reduced from 185 minutes to 115 minutes.

The new railway will provide service to the western suburb of Halkali and from the east the Gebzi district in Kocaeli province on the Istanbul border. While the Marmaray line has been connecting, since 2013, three stations from the European section with two stations from the Asian section of Istanbul.

Minister of Transport and Infrastructure Turhan said that this project, which he called the project of the century, will be considered the main backbone of transport in Istanbul, where it will complete the Marmaray line and will provide a continuous transmission line in Istanbul from Gebze to Halkali and combine all railway systems in Istanbul.

According to Minister Turhan, all infrastructure and stations have been rebuilt as part of the project. A total of 63 km of dual lines and current stations consisting of a 43.8 km long line from Aerlik Chishmi to Gebze on the Asian side and a 19.2 km line from Kazelichmi to Halkali On the European side.

All infrastructure and stations have been rebuilt to allow three lines along the same route. Marmaray trains will use two lines in the north of the three new lines to be built. The suburban process on the subway meter can be achieved at two-minute intervals. The third line in the south will be used by passenger and freight trains between trains and high-speed trains. A total of 10 units have been built to ensure the two-way express train runs on this line.

A total of 38 new stations, 11 of them on the European side and 27 on the Asian side, have been built, where seven stations of them (Gebze, Pendik, Maltepe, Bostancı, Söğütlüçeşme, Bakırköy and Halkalı) will be the railway stations between the suburbs. The other 31 stations will only serve Marmary trains as suburban stations. Two bridges, 29 pedestrian underpasses, 27 highway underpasses, 12 pedestrian overpasses, 21 highway overpasses, 60 culverts and 19 river-crossing bridges have been rebuilt.

Carrying 1.7 million passengers per day, the Gebze-Halkalı train line will lead to a big comfort in Istanbul traffic.

Minister Turhan also mentioned that the Gebze-Halkalı express train line, which will begin passenger transportation this year, will be ready and will start operation with the Ankara-Istanbul express train line. Thus, the high-speed train arriving from Ankara to Istanbul will be able to stop at Gebze, Pendik, Maltepe, Bostancı, Söğütlüçeşme, Bakırköy and Halkalı.