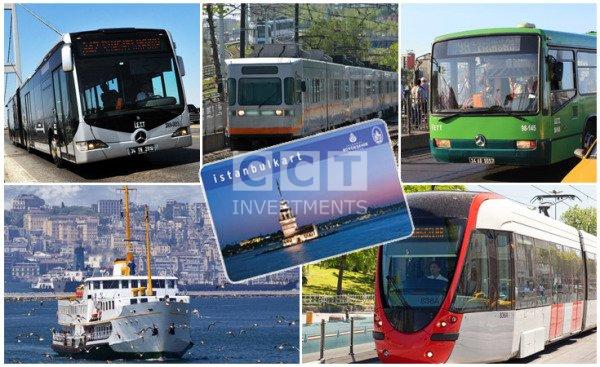 The rapid growth and the increasing population that reached over 17 million people in Istanbul, where it is knows to be one of most populated cities in the world, has called for increasing need of public transportation means.

Istanbul public transportation officially started in 1896, after the agreement to build the Tramway, where a new small tunnel was built to connect between Galata and Pera, until this day, numerous means were put in service.

Starting from the very popular of them all, the Metro Bus, which started operating in the beginning through Topkapi – Avcilar areas. It was created mainly to reduce the traffic on the roads, and to provide fast and comfortable transportation. The construction began in 2007, linking Topkapi to Avcilar in just 22 minutes, reduced from 48 minutes, expanding to the length of 18.5 kilometers. In 2008, more stations and routs were built, reaching from Avcilar to Zincirlikuyu, and the stations increased to 22 stations in just 77 days.

The third rout was opened to reach Sogutlucesme, in the Asian side, thus connecting the two parts of the city together, in the shortest way possible, and the distance between Avcilar and Sogutlucesme was reduced to only 63 minutes only. After some time yet another rout was constructed, expanding to Beylikduzu area in 2012. The total length of the metro bus route duration is 83 minutes, from Europe to Asia, carrying over 700.000 passengers daily.

Another famous mean of transportation is the metro. The construction of the underground railway in Istanbul began in 1992, and the first line to be put in service was the Levent – Taksim rail, in the year 2000, which include 6 stations, all constructed the same but have different colors. With a total length of 8.5 Km.

A new extension was built in 2011, connecting between Haciosman to Sishane, and in 2014, they completed the construction to reach Yenikapi as well, with a total length of 23.5 km. From Yenikapi, several extensions were and are being built, to reach Ataturk airport, Kirazli, as well as in the Asian side to Kadikoy and Kartal.

The total length of the whole railway system is expected to reach 641 km by the year 2023, the 100th year anniversary of the Turkish Republic.

Other transportation include many other, like ferry boat, which carry the passengers from the Asian to the Anatolian side for example, or from Istanbul to Bursa or Yalova. Buses also has a great share of the public transportation, where in every street there has to be a bus stop, if not two or three. The buses alone carry over 900.000 passengers daily.

The total number of people using any means of transportation daily in Istanbul alone, can reach up to 11 million passengers, carried on these different means, from taxis, minibuses, metro bus, to Metro and tramways and ferries. And the continuing interest in Istanbul, is generating the needs for more and better public transportation.