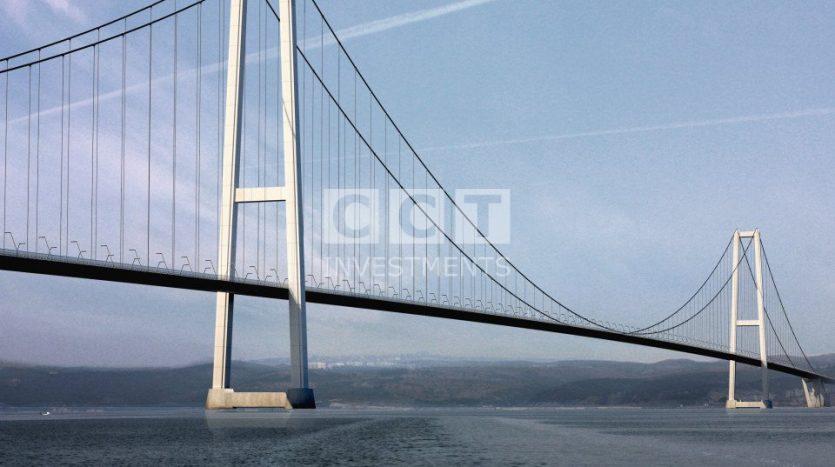 The need to connect several parts of Turkish cities, has raised the building of bridges between them. Starting from Istanbul’s two existing bridges, and now in construction the third new Bridge, ending up with the most recent of them all Izmit Bay Bridge.

Construction and operation of the bridge was awarded to a joint venture formed by five Turkish companies and one Italian construction company following the international Build–operate–transfer tender that took place in April 2009. As of 2010, the contract was signed for the project that is estimated to cost 11 billion Turkish Liras for the entire highway from Gebze to Bursa.

The 1 Billion USD privately financed bridge, was designed by a Danish architecture and engineering firm, COWI, one of the most experienced companies in this field, consists of 3 lanes of traffic in either direction. The total length of the bridge is to be 3.3 kilometers, with a main span of 1,688 meters. And a steel suspension bridge together with steel and reinforced concrete viaducts providing an access to the suspension bridge to cross the Izmit Bay extending within the motorway section.

With this project which starts from an interchange that shall be built on the Anatolian Motorway, the Izmit Bay is crossed via the suspension bridge between Kababurun and Dilburnu locations. After passing through the bridge, the motorway crosses an existing state highway by means of an interchange and then it extends to join into the Bursa-Orhangazi Motorway section in the vicinity of Orhangazi town

This design ensures that the bridge will be a magnificent piece of work, combining the features of local landscapes and seascapes. As well as taking into consideration earthquake factors that may jeopardize the bridge. It all merges with one another to create an amazing design in terms of colors, engineering and finishing.

Just recently the heaviest and largest piece of the bridge was installed, which weights is two thousand and 600 tons, length of 124 meters and a width of 36 meters. And the company overseeing the creation of the bridge has announced the end of the bridge columns lifting has reached 252 meters in length. And by the time of the finishing of this projects it is expected to carry a daily traffic approximately 35.000 vehicles per week.