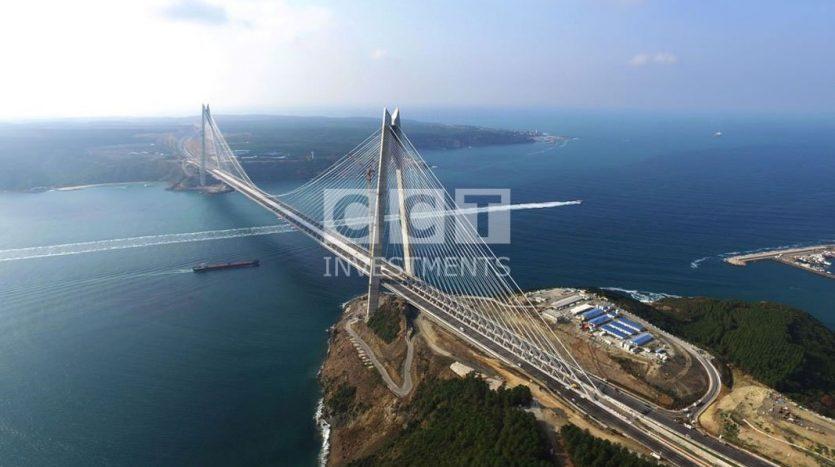 Opening the Widest Suspension Bridge in the World

Today Friday 26/08/2016 Turkey celebrates the opening of the widest suspension bridge in the world Sultan Yavuz Selim Bridge (Selim I), where it connects the two sides of Istanbul , European and Asian.

In the presence of a number of representatives of foreign countries, Turkish President Recep Tayyip Erdogan and Prime Minister Ben Ali Yildirim inaugurate the third suspended bridge on the Bosphorus Strait, which links the European and Asian continents

This bridge is the widest bridge in the world where its width is 59 meters and it contains ten tracks, eight of them will be for cars four on each side and there will be two tracks for railways trains means that this bridge will provide a passage service to approximately 135 thousand cars a day.

The length of the bridge Sultan Selim 2164 meters so it is the longest suspension bridge in the world which is supported with railway tracks and the its columns are considered the highest in the world, with an average elevation of 322 meters.

The Turks in general and especially who are living in Istanbul hope that this bridge will help to solve the traffic crisis that is plaguing Istanbul city, where the bridge will ease the intensity of the two other bridges martyrs of July 15 Bridge and the Sultan Fatih Mehmet Bridge

Construction of the bridge cost amounted to about 3 billion US $. This bridge will also contribute dramatically and effectively in reducing the proportion of air pollution and many other environmental problems caused by traffic jams that were plaguing in the surrounding areas of the other two bridges as a result of traffic congestion.