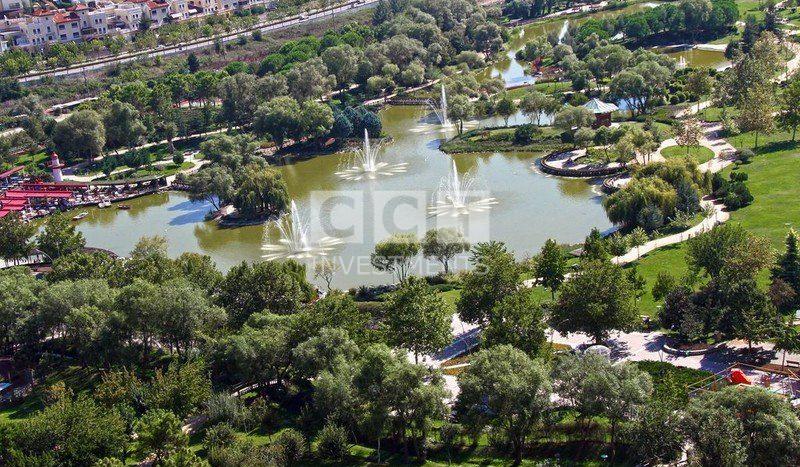 Istanbul is considered to be one of the biggest cities in the world, having a feature of extending over two continents, Asian and European ones. Having that great area has divided it to a total of 32 districts and numerous neighbors from both sides, one of which is Bahcesehir or the city of Garden in Turkish.

Bahcesehir is located on the European suburbs of Istanbul, between the two well-known lakes of Istanbul, Buyukcekmece and Kucukcekmece. Just 35 Km away from the city center and Taksim, and only 18 km from Ataturk Airport.

It was mainly designed to fit the life styles of people escaping from the rapid city hustle to a more calm area, in a more green surroundings. And there are many attractions to this neighbor, including a beautiful lake, shopping centers, cafes, restaurants, cinemas. The lake has many features to keep the whole family entertained, like a mini golf course, cafes, and play grounds. As well as the shopping centers, including the Akbati center and Park Prestige Mall, where they are as good as the ones we find in the city center.

Another attraction of this neighbor is the two lakes surrounding it, as they are only 15 min drive away, and one can enjoy a stunning view and great sunset over the Marmara Sea.

As the area is aiming to be the new center of Istanbul, being on the banks of the new Canal Project, and the closeness to the new Bosphorus Bridge, has raised the value of the land.

Bahcesehir more became desirable over the past years, because of its great urban modern design. Since 2005 the area has changed, growing to be one of the biggest in Istanbul, and having many luxury apartments and villas, as well as the new investments that started rising to enhance the lifestyle of its habitants

Today, it is considered the favorite luxury district among its residents, as all the roads are well maintained, clean and wide, green areas and parks are well kept after, also the social facilities and malls bring a new modern style to families, surrounded by many schools and universities, where people can have a safe life as well as affordable prices.

The value of the area is quite affordable compared to central districts of Istanbul, however, the big advantage here is that you can enjoy a luxurious, quiet days. In addition to that, it has an easy access to the center, through the E5 and E6 high ways.

New investment opportunities are being built there every day. And many off plan projects are desired due to the fact that the payment plans are convenient, and the prices once completed will increase up to 15 %, which provides a safe investment environment for buyers.

Bahcesehir has a very high demand, and properties prices have doubled over the last ten years, which made the capital gain more achievable, and can be considered a highly recommended opportunity especially in the few coming years.