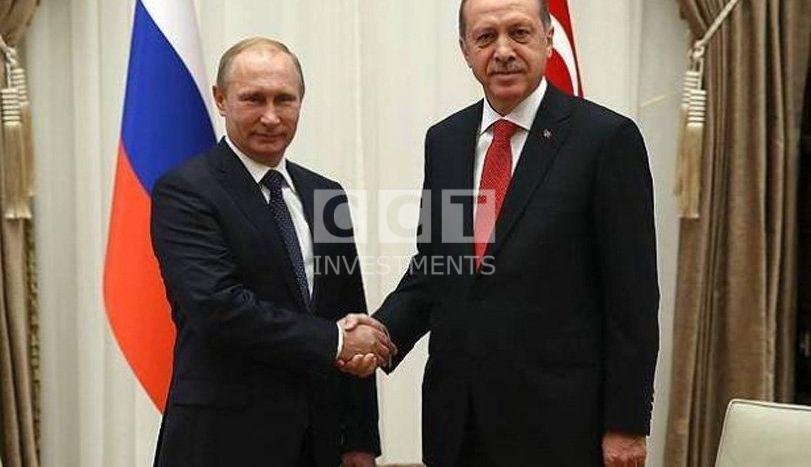 Results of the Meeting of Erdogan and Putin

On Tuesday, 08.09.2016 Turkish President Recep Tayyip Erdogan went on an official visit to the Russian city of St. Petersburg, where he will meet during the visit with his Russian counterpart Vladimir Putin.

At the press conference, which was at the conclusion of their talks, Putin said that it has been conducting constructive talks on bilateral relations and international and regional issues.

Putin also called for intensified the work for the revitalization of trade and economy between the two countries, which saw a decline in the recent period by 42%, adding that it will be focusing on the most promising projects and to intensify the investments.

Putin also stressed that the Russian government is preparing a program to intensify trade and cultural cooperation between Turkey and Russia in 2016.

The Russian president said that they discussed the revitalization of tourist trips between Russia and Turkey, which stopped for a period, and Russia has asked for security guarantees and obtained from Turkey.

He also explained that it would move away from the bureaucracy that stands in the way of the implementation of bilateral projects between Turkey and Russia and he pointed out that the issue of canceling the visa is linked to economic relations and there is a genuine desire to cancel it.

As for the situation in Syria, the Russian president said that there is a difference in views on the issue of solving the Syrian crisis but it has been agreement between the Russian and

Turkish sides on finding a settlement with the participation of foreign ministers and the intelligence of the two countries, and he stressed that it will not be getting on democratic solutions, but in democratic ways, He also noted that the goal of both parties to solve the Syrian crisis is one goal and they will be working to find a solution.

As for his part, the Turkish President Recep Tayyip Erdogan thanked the Russian president for his invitation and his hospitality and stressed that the meeting was productive after a long period of tension that occurred after the dropping of Russian fighter.

Erdogan also stressed on the insistence of the two parties to return relations as before, and also improve them and move them to a stronger level than it was.

Erdogan explained that all obstacles that stand in the way of businessmen and investors in the two countries will be removed and also the tourist trips will be activated, and it was agreed to set up Turkish Russian Fund for joint investments and the cooperation in the field of defense industries will be increased

Erdogan said that it was his country’s goals to reach the size of trade exchange between Turkey and Russia to 100 billion $, and he stressed that his country is seeking to achieve this goal.

At the end, Erdogan said that this meeting was not only for Turkey and Russia, but also it will have an impact on crises in many other countries.