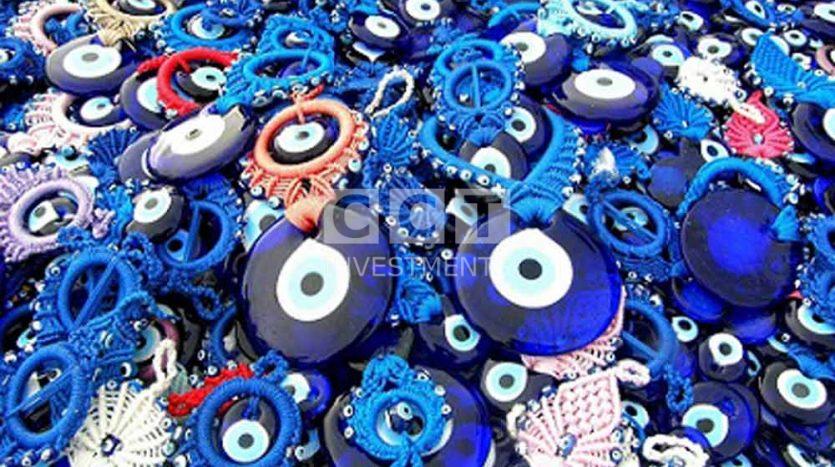 The Blue Bead in the Turkish Culture

The blue bead might be a beautiful sight in some cases, when looked at as beauty and decoration, and it eases the weight of religious mythology and beliefs. However, despite the great development we see in the world, the blue bead in all its forms still takes a big place in the heart of the Turks and their culture, to prevent envy and brig good luck.

Turks still use the blue bead in all aspects of their lives, they believe till this day that it prevent bad luck and envy from people. They are creative in its manufacture, by colors and shapes, and all classes of people are interested in it, from simple ones to the rich ones.

Turks prefer the glass blue bead, they consider them better than plastic one, as it is more beautiful, and they think that it breaks and shatters once someone realizes that they won over the evil eye.

As for the mystery of the color blue, it is attributed to the ancient people believes in three colors, which were apparent in their jewelry, red, green, and blue. Each color symbols something, red is for the blood in the veins, and it gives life and energy, green symbolized the greenness of the plants and crops that the earth provides, and blue is connected to the sky, where the sun and gods live, protecting and blessing the humans.

The Turks don’t believe in the blue bead in religious terms, they consider this bead or the one eye as to attract the attentions, thus deflecting the evil envious eye focus, and getting rid of the bad influence.

People used to believe that the jewelry has some sort of magical affects and powers, as well as being for decoration. They took the amulets and attached them to different body parts, they each had its own purpose, and there were amulets to prevent diseases, magic, envy, drawing or accidents.

There is no specific date for the origin of the blue bead. Some say it goes back to the 6th century BC. And before Islam, the belief of envy was different according to the social status, rich people wore jewelry made of gold and gems, which the public used polished blue beads.

Turkey was able in 2014 to list a collection of cultural and heritage traditions to UNESCO, such as the Turkish coffee and traditions, the people’s narrator, Turkish oil wrestling, the blue bead culture and many more.

The blue bead became like an obsession for the Turkish people, where most of them believe in its powers to deflect envy, and it became part of their lives. There isn’t a house that doesn’t have one, or even shops, especially those who sell accessories, and home decorations, they make sure to add it to everything and they make it in different colors also, like red, yellow and green, due to the high demand from costumers.

The blue bead occupies a major role in the Turkish culture. When they give any presents to one another, the blue bead has to be in it, as they are everywhere, houses, cars, shops, or as a necklace or on their pots . They believe it has magical powers to prevent evil or accidents.

Read more about the Turkish culture and habits