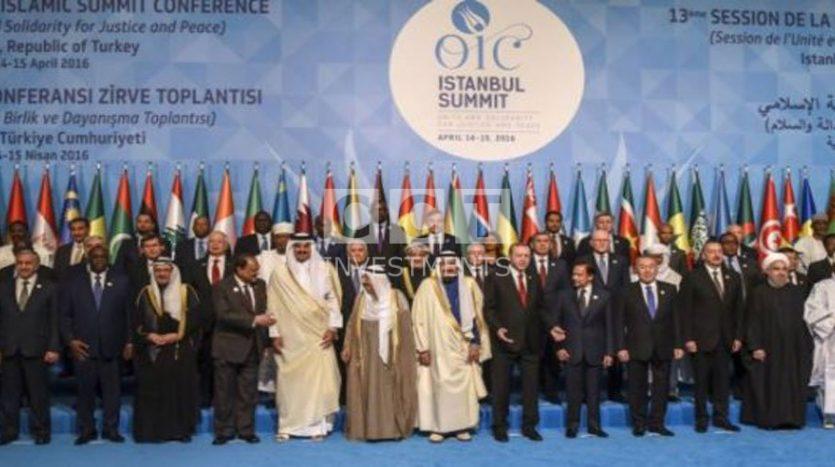 The Summit of Islamic Cooperation

In Turkey and specifically in Istanbul city, the 13th summit of the Organization of Islamic Cooperation began on Thursday. Under the slogan of “unity and solidarity for justice and peace.” More than thirty heads of state and government and other officials.

Of the most prominent presents at the summit, the Saudi king Salman bin Abdul-Aziz and The Iranian President Hassan Rohani, Jordan’s King Abdullah the second and the Egyptian President Abdel Fattah al-Sisi will miss the attendance. It is noteworthy that the summit held under intense security emphases.

The General Secretary of the Organization of Islamic Cooperation Iyad Madani began the conference with his speech and said that the organization is closely following the developments of the situation in Syria and the United Nations efforts to find a political solution to the crisis there, through the Geneva negotiations. He appealed to the Palestinian factions to work hard to get rid of problems and differences and make concessions to form a government.

Madani also went in his speech to the situation in Yemen, Libya, and Iraq, and called on the rest of the members to ratify the Convention on the fight against terrorism.

Before the summit a meeting of foreign ministers of the member states was held over two days, they put through the agenda and the files that will be discussed at the summit and “terrorism.” is on top.

The ministers discuss the situation in Syria, Iraq, Yemen and Libya, and Nagorno-Karabakh region which is disputed by Azerbaijan and Armenia.

Turkey’s goal of the summit to highlight its impact on the Islamic world and the rapprochement between the Islamic Cooperation Organization countries, but disagreements over crisis in Syria and Yemen can take up most of the talks

The leaders discussed over two days at Islamic summit The Islam phobia files, the general situation and humanitarian in the Muslim world, and plan for the next ten years 2015-2025 of the organization, along with the Palestinian issue, the Arab-Israeli conflict, the differences in the Muslim world, immigration, the development of local Muslim communities from non-Member States, and the fight against terrorism and extremism.

Erdogan said in his opening speech that the importance of cooperation between Islamic countries and unity despite all the differences and the dissemination of justice and peace in the Islamic world, saying: “We have to move away from the disagreements and rivalries” and called to establish an institution of the police and intelligence services belonging to the Organization of Islamic Cooperation.

Erdogan said, that terrorism is one of the biggest problems facing the Islamic world, and that terrorists who kill under the name of Islam cannot be brought Islam.

Erdogan attacked the big five countries, and called for the restructuring of the Security Council in the light of the ethnic and religious map of the world, and to hold a conference for women in the framework of Organization of Islamic Cooperation, because women should have the right to express their problems at all levels.

Erdogan called, away from the Security Council, to establish a joint institution between the Red Crescent Associations and other institution to settle economic disputes among Islamic countries, and can be managed in Istanbul, for example.