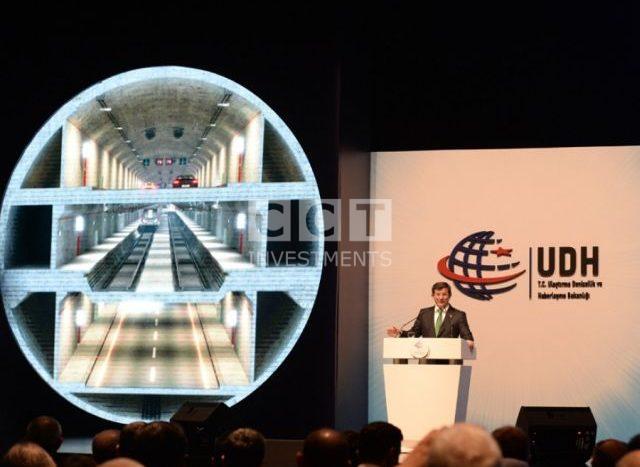 In February earlier this year, Turkish Prime Minister Ahmet Davutoğlu announced that a new third mega tunnel will be built under Istanbul’s Bosphorus Strait and will consist of both the metro line and dual motorway.  The other two tunnels are the Marmaray under water rail tunnel and the Eurasia car tunnel, which is still under construction. The tunnel will be a three-lever sub-sea tunnel that will connect railway lines and two highway, cutting travel time significantly across the two sides of Istanbul. The project’s estimated cost is $3.5 billion and will be built with a “build-operate-transfer model” in the form of a public-private-partnership scheme.

This project combined the “fast metro tunnel project,” which will start from Bakırköy-İncirli in E-5 axis and reach Söğütlüçeşme, similar to the Marmaray and the “highway tunnel” with 2×2 lines similar to the Eurasia Tunnel located on the TEM highway axis in order to decrease the traffic on the Fatih Sultan Mehmet Bridge, the second bridge on the Bosphorus.

In highways, it will connect the 3rd Airport, currently under construction, and Yavuz Sultan Selim Bridge, the third bridge on Bosporus which is also under construction, connection to North Marmara Highway, TEM and D100 (E-5) Highway. There will be 14 stops on the 31 kilometer fast metro track between İncirli and Söğütlüçeşme. The metro section with a 1.5 million passenger capacity and 75,000 passenger capacity in one direction will be integrated with nine other rail systems and is expected to be used by 6.5 million passengers.

The highway section of the project will cover the distance between TEM Highway Hasdal Crossroad and Ümraniye Çamlık Crossroad and will be around 16,150 meters. The section before the three-level tunnel on the European side will be 5.6 kilometers, the three-level section is 6.5 kilometers and the part after the three-level section on the Anatolian side will be 4.5 kilometers long. It will enable travelling from Hasdal to Çamlık in 14 minutes and the highway has a capacity of 120,000 vehicles on a daily basis. The number of lanes will be 2 by 2.

The diameter of the tunnel will be 16.8 meters and will be built 110 meters from the sea surface. The depth of the sea where it crosses the Bosporus will be 60-65 meters and the length of the part that will contain both the metro and the highway shall be 6.5 kilometers. Upon completion, 800 workers are expected to be working in its operations. The tunnel will enable faster, more efficient and cheaper transportation between the two sides of Istanbul and also reducing traffic on the bridges and extended the metro lines and making it reach more areas and more accessible to more residents of Istanbul.