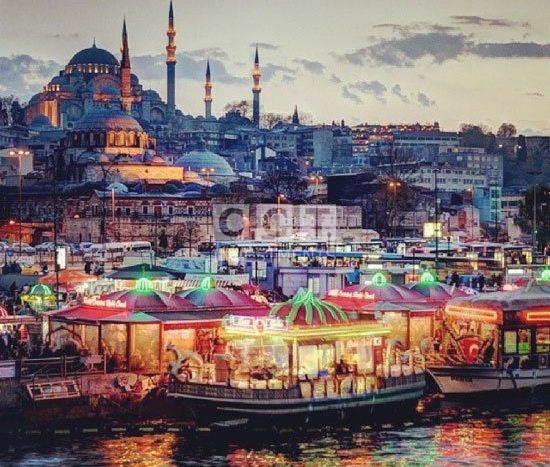 “Eminonu” Area and Harbor , is one of the largest open-air museum in Turkey, it was the heart “Constantinople” walled city over the long history, currently it belongs to Fatih district, cross the Golden Horn Bridge to Eminonu, up the Bosphorus to the Marmara Sea, and it overlooks the Topkapı Palace , and Sultanahmet Mosque, and Hagia Sophia, in a nutshell, “Eminonu” is the main tourist destination in Istanbul.

This area was named like this, in occurrence of the marine customs, and the Secretariat of the Customs in the Ottoman era, the word “Eminonu” means (the Secretary), i.e. the Special Secretariat customs, and this region with Fatih area were Istanbul Center in the early era of the modern Republic.

“Eminonu” field is rich of beauty, history and great traditions, it acquires many mosques, historic buildings, and the most famous landmarks in Istanbul.

The famous Sultan Ahmed Mosque is located in it, which contains the Topkapı Palace (i.e. the high door palace), and Hagia Sophia Mosque, and Hagia Irene, in addition to that it contains about a thousand marks of the excellence Ottoman architectural.

Inside it the Egyptian market, it is not that big compared to the big bazaar, but it located next to the beach, and to the New Mosque, where tourists come through to buy gifts and souvenirs, Turkish sweets, delicacies, and dried fruit.

Inside the Eminonu there is the 4th Khan in Istanbul, which previously was an office building, and was rehabilitated to become a five-star hotel chain of the Ottoman heritage hotels.

One Of the most important and the most prominent “Eminonu” field are the beautiful, diverse and popular restaurants , that field was best known historically for the grilled fresh fish, in which abound small shops and restaurants, this stalls selling grilled fish, are the key factor of attracting Turks and tourists to the field. There is as well a medium, and large-sized boats, lined on both sides of the strait to grill fish, these restaurants are highly attractive where it’s hardly seen without customers throughout the whole day, from Turks or tourists who come for that area.

Any tourists and visitors can reach “Eminonu” area easily though the Sultan ahmet Mosque, where the Light Rail “Tramways” is located in Sultan ahmet Tram station, and they get off at the Eminonu station.

Eminonu Port is one of the most famous ferry ports in Istanbul, and in all Turkey, The ferries reach several destinations in the Asian side of the city, also this port provide private trips to the Bosporus. Private boats are available and can be rented for tours in Bosporus Strait , and other places in the Sea of Marmara, where some tourist offices in the city, in coordination with the owners of these boats, in order to rent them for tourist groups, or large families looking for privacy.

Eminonu feature popular markets, with low prices, located in the bottom side of the tram, in the underground station, connected though a separated special tray, the market is ideal to buy gifts, especially shoes, watches, and clothing.

Istanbul expanding to become a huge city, with business and tourism centers, but “Eminonu” still full of activity and movement, the most crowded ferry ports exist there, that cross the Bosporus and the Sea of Marmara.

This is why “Eminonu” is one of the most famous areas of Istanbul, where its considered as a strategic center, being one of the busiest and most vital areas in European Istanbul, it do not calm down throughout the whole week.