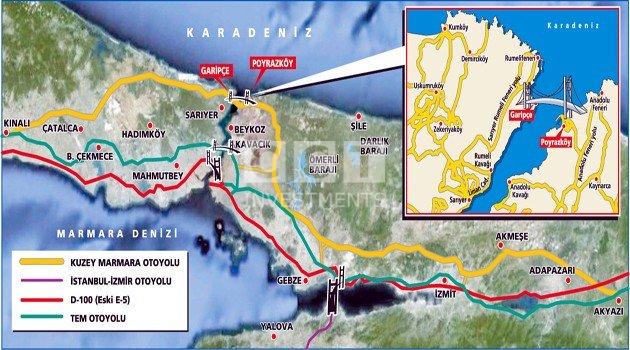 The new highway which will be located in the north part of Istanbul mainly, called as Northern Marmara Motorways, will be 115 km long from its beginning to its end.

Increasing traffic in dense areas of Istanbul has generated the need of the third bridge and third highway together. When completed, this highway is expected to reduce the traffic in other two highways and the bridges which means mainly the traffic in the city center. Besides, surely this will decline the gas consumption by vehicles as well.

Principally, big trucks that were able to use second highway in specific hours of the day, will be using the third highway located in the north. This will help them save time so that  it will reduce the cost for export and import sectors; and reduce the traffic in other highways.

The project was tendered in April 2012 and is expected to be completed by the end of 2015. It will be operated by IC Ictas – Astaldi JV companies for 10 years 2 months 20 days and then will be transferred to the management of Ministry of Transportation.