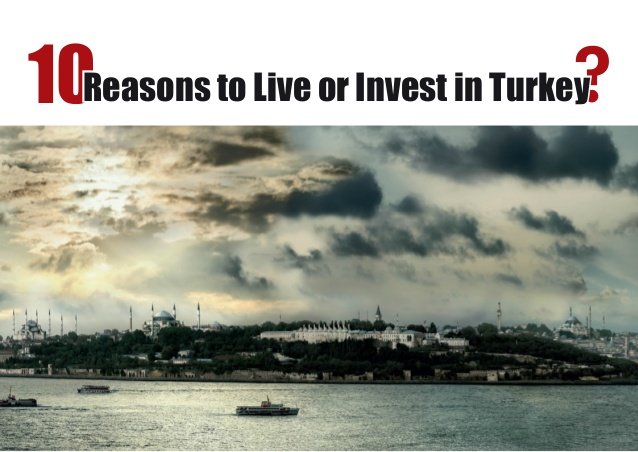 10 Reasons to invest in Turkey

Stable economic growth with an average annual real GDP growth rate of 5.1 percent over the past decade (TurkStat)

Promising economy with a bright future as it is expected to become the fastest growing economy among the OECD members during 2012-2017 with an average annual real GDP growth rate of 5.2 percent (OECD Economic Outlook No. 91)

Institutionalized economy fueled by USD 135 billion of FDI in the last decade. (CBRT)

More than 700,000 high school graduates with around half from vocational and technical high schools (2012, TurkStat)

Business-friendly environment with average of 6 days to set up a company, while the average in OECD members is more than 11 days (World Bank Doing Business Report 2014)

Equal treatment for all investors

Around 36,950 companies with international capital in 2013 (Ministry of Economy)

A natural bridge between both East-West and North-South axes, thus creating an efficient and cost effective outlet to major markets

Access to multiple markets worth USD 25 trillion of GDP

7-ENERGY CORRIDOR AND TERMINAL OF EUROPE

Located at a close proximity of more than 70 percent of the world’s proven primary energy reserves, while the largest energy consumer, which is Europe, is located right to the west of Turkey, thus making the country a linchpin in energy transit and an energy terminal in the region

Tax benefits and incentives in Technology Development Zones, Industrial Zones and Free Zones could include total or partial exemption from Corporate Income Tax, a grant on employer’s social security share, as well as land allocation

Incentives for strategic investment to decrease imports, for large-scale investments, as well as for regional investments

Accession negotiations with the EU

note: The information provided in this post is taken from the Republic of Turkey Prime Ministry Investment Support and Promotion Agency’s website: www.invest.gov.tr