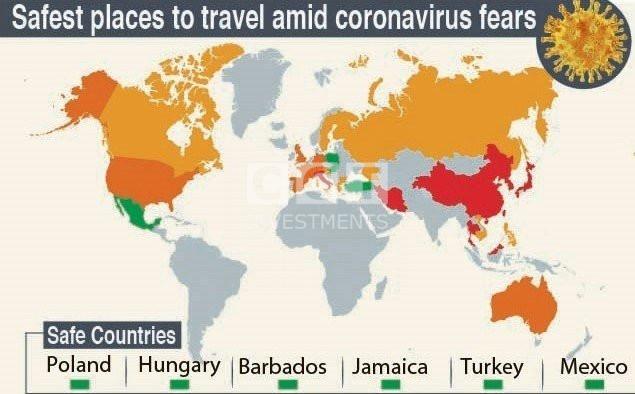 Turkey is One of the Safest Countries of Corona Virus

As the Turkish experience in preventing the new Corona virus sweeping the world, leaving thousands of deaths and injuries, has inspired many countries of the world, led by the United States of America and Britain.

Turkey’s measures and effective preventive policies against the new Corona virus have turned the world’s attention, with the virus spreading in most countries and not entering Turkish territory, and this has made it a pioneering model that many countries seek to track.

Turkey is considered of one of the first countries in which the Ministry of Health announced the start of deploying thermal cameras at airports to detect infected cases and impose quarantine to stop the spread of the virus.

Many flights were gradually canceled to several destinations in the region, and that was among fears of an emerging Corona Virus, as many people canceled their planned holiday trips, such as the British, who were planning to go on Easter trips.

In addition to the fact that Turkey is a very popular destination recently among British tourists, it is still free of new cases of Corona Virus.

The British tourist expert Nikki Kelvin points out that Turkey is included in the list of tourist destinations that are free of Corona Virus and are suitable for short and long-term trips.

Last year 2019, two and a half million tourists from Britain visited Turkey, and in recent years, the two coastal states of Antalya and Mugla which are full of resorts are among the most popular tourist destinations for British tourists.

Turkey is considered as a cheap tourist destination for the British, in addition to the Turkish authorities’ abolition of visa fees for citizens of six countries, including Britain, starting from March 2. Thus, the British tourist will not be required to pay £ 27 for obtaining a visa, and the new system will allow them to enter the country for 90 days for every 180 days.

السياحة العلاجية في تركيا للأجانب
Do You Need a Lawyer to Buy a House in Turkey?