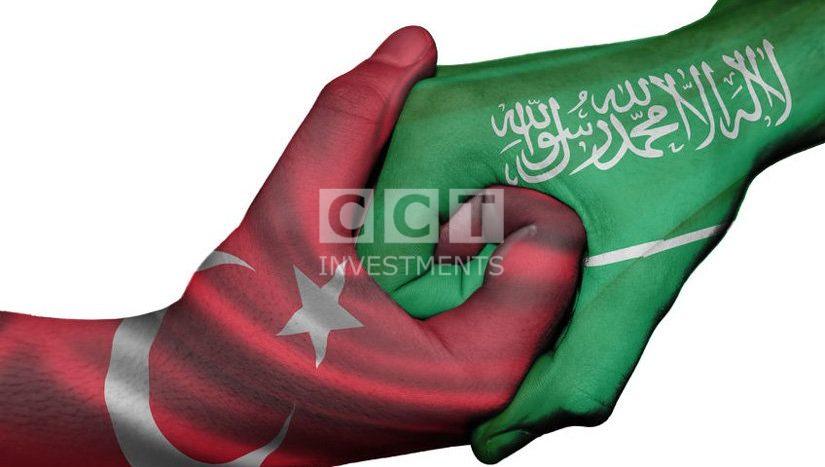 Turkey intends to reach the Saudi investments on its land to $ 25 billion and raising the trade with The Saudi Kingdom to $ 20 billion by 2023, noting that the Saudi investments in Turkey currently, as opposed to the real estate sector, up to $ 1.9 billion, and the volume of trade exchange between the two countries reached to 7.4 billion dollars in 2013, according to Turkish supporting and encouraging investments agency in Saudi Arabia.

Turkey had approved a number of economic reforms which aim to attract investors , including the adoption of own real estate law, which contributed to pump more Saudi investments in Turkey, and was followed also by a new law allowing to obtain a visa electronically.

The Saudi Kingdom exports to Turkey were 1.1 percent of the total exports for the year 2012, amounting to 388.4 billion dollars, and 2.3 percent of its imports in the same year, which amounted to 155.6 billion dollars, above all Turkey is the most important trading partner for Saudi Arabia between all other non-Arabic Islamic countries, and occupies the 12th place among the most important country, which the Saudi Kingdom imports from, according to 2012 data. According to the latest data for Saudi Statistics and Information foundation, the trade exchange between the two countries reached 7.9 billion dollars (29.6 billion Saudi riyals) in 2012, Saudi exports to Turkey worth of $ 4.3 billion, compared with the imports of $ 3.6 billion.

According to a previous statements by former administrators of Saudi Turkish Business Council, Turkey has become an attractive place for Saudi investment, where Saudi businessmen investments in Turkey reached more than $ 1.6 billion, according to official Turkish figures, in contrast, there is an increase number of Turkish construction firms and contractors that are involved in all government competitions sectors and large enterprises construction for infrastructure in Saudi Arabia.

An Official said that a major Turkish construction companies has become a partner with a local Saudi companies developing airports, such as King Khalid Airport, as well as dams and bridges.

Saudi investments are concentrated in the real estate sector in two types, the first specialized with housing ownership which Turkey systems has allowed it to the citizens of the Gulf Cooperation Council (GCC) for nearly two years, and the other type of investment that is being practice by establishing companies for real estate sector activities

A study from “Ridden and Horne” company, showed that the flow movement of the Gulf Cooperation Council (GCC) investments in the Turkish real estate market, grew by 500 percent during the past three years, backed-by-step liberalization of foreign investment law in Turkey in 2012.

According to the same study, in the last year Istanbul had took a place as the most famous tourist destination in the world , because of the fullness of its visitors attract elements, accompanied by an increase of about 450 percent in the number of tourists coming from the Gulf region through the past two years.

Foreign investment law which was released in Turkey, gives the rights for the normal foreign person, to buy any kind of all property (land, housing, work place), on condition to obey the limits for foreign ownership by Turkish law.

Turkey’s booming real estate sector is the center of attraction for Gulf investments, in 2014 Gulf investors spend about $ 4.3 billion on real estate in Turkey, bringing the total volume of investments to 16.29 billion dollars over the past six years, according to published data.

President of the UAE Investment Forum, Dawood Shezawi, said that the Turkish market is still maintaining its attractiveness for Gulf capital, and that Turkey has taken a step forward, after the first elections of November last, for investors, pointing out to the satisfaction of Gulf investors of election results, and also mentioned that investors prefer to invest in an environment where the data can be estimated.

The head of LMG Global DMC, the representing company of the UAE invest in Turkey Forum, Mr. Gokhan Ilgar, Expected the growing of Arab investor in Turkey following the recent elections, pointing out that the point of Arab investors has changed from Istanbul to the Black Sea region, pointing also that real estate investment in the state of Trabzon alone, increased by 290 percent.