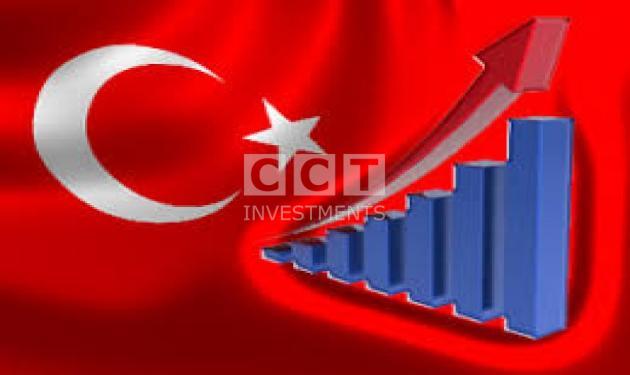 The Turkish economy grew faster than expected in the fourth quarter of last year, according to the Bloomberg Network, as it has been boosted by the rising expenses of Turkish families and supporting economic activities.

According to the agency, Gross Domestic Product rose by 3,5% in the period from October to December and it is one of the fastest estimates surveyed by the Bloomberg network, which expanded by 1,9%.

State expenditure, including civil servants’ wages, goods, and services, rose by 0.8% in the fourth quarter of 2015 over the same period in 2016. Private consumption rose by 5.7%, which is the main driver of growth.

According to British economist William Jackson, he expects the growth rate in 2017 to grow to 2.5% instead of his previous expectation that the growth rate will not exceed 1.8%.

The seasonal production rate increased by 3.8% compared to the previous three months while last year’s growth was 2.9% compared to 6.1% in 2015, according to the Turkish Statistical Institute.

Consumer sentiment and investment shrank and the economy shrank on an annualized basis, mainly due to a contraction in consumer spending, which was usually the main driver of growth. The Turkish lira was strengthened to the US dollar following the publication of the Statistics Institute’s results to 3.64%, while the rate of economic contraction fell to 1.3% instead of 1.8% in the third quarter of last year and growth rate over the previous three months rose to 5.3% from 4.5%.

The Bloomberg agency reported that the Turkish government has adopted a series of expansionary fiscal policies to counteract the slowdown. And among the catalytic measures implemented was the incentives to promote employment and agricultural production and the tax cuts for the tourism industry.