Where to Buy a Property? Dubai or Istanbul? 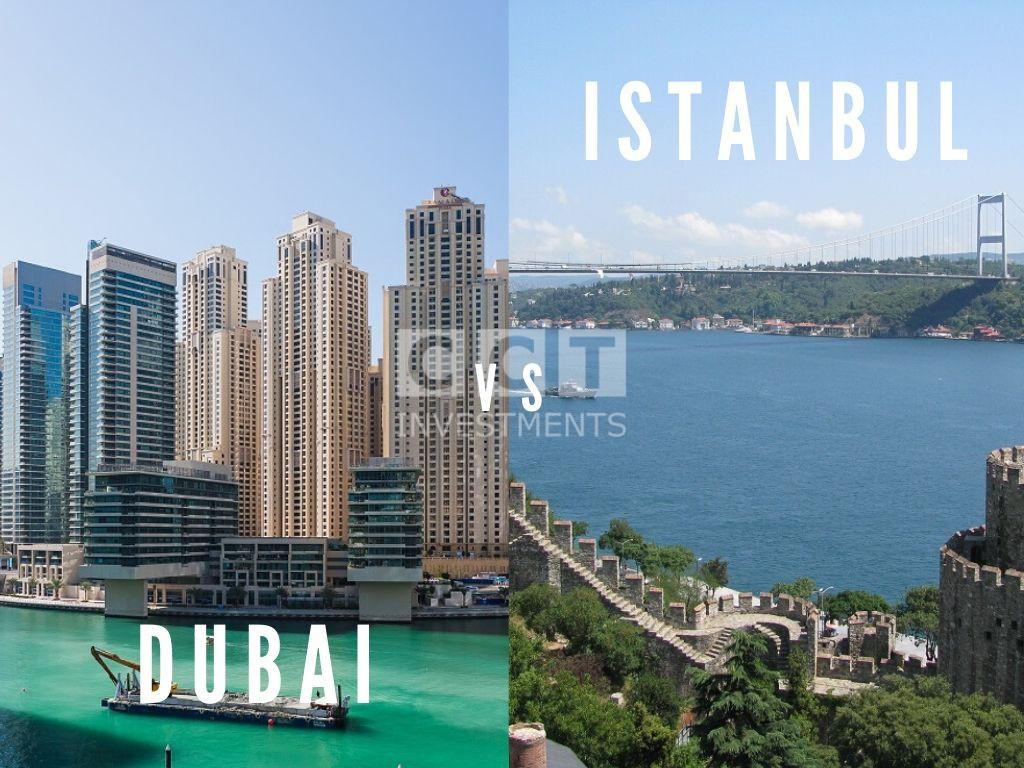 The two beautiful cities of the Middle East region have their own attractive points and advantages each, and both have a remarkable position in the investment markets and among the top cities of the world.

Going in some details would help you see things more clearly and would help you in making up your mind if you are planning to invest in the real estate market in one of them.

Apart from its deep and rich history, Istanbul has a wonderful present that puts it among the top cities worldwide in many sectors and classifications. The city had been almost recreated or revived about 20 years ago when it had a new mayor that was able with his team to rebuild the infrastructure of the city to be reliable again, reorganize the resources and services to be productive again, and refurbish the face of the city to be as attractive as it was in its golden days. The city has been ever since growing and attracting people from all around Turkey to come and live in it; and little by little the city started to attract people from out of Turkey to live, invest, build businesses, and grab the opportunities it is offering.

During the 2000s Istanbul was able to generate its electricity out of its garbage, draw enough water for its inhabitants and the newcomers, extend the transportation network and build new railways, tunnels, bridges, and attract more tourists and investors.

The progress continued despite the disturbance of some terrorist acts in 2016, and the military coup and its consequences, and despite that the following years were unstable with several political and economic difficulties which lead to a fall in the value of the Turkish Lira.

It happened that Dubai also witnessed its extraordinary evolution in the last two decades, starting from the late 1990s and till 2008 Dubai was the brightest name and the most attractive city in the world for investments and businesses. The Tax-free concept in addition to the geographical location along some politics and a lot of marketing built a dream of big profit that made businesses from all around the world race to have a branch or centers in this city to finally have their profits pure without sharing it with any government. The big dreams hit the reality stones in 2008 with the global financial crisis which put the whole world in a halt for months. After awaking from the shock Dubai tried to continue to grow using the same attracting and marketing style which lost its charming effect over the world that became a very careful spender. In 2013 Dubai won the right to host the big Expo fair in 2020 and that was the spark that turned the growing wheels again allowing new projects to be started or done like the DWC airport, Dubai south district, and many other residential and commercial projects that were done or launched to be ready in 2020. But here Dubai came to another stumble along with the whole world again by the pandemic of COVID-19. The pandemic effects are expected to company us for months or a few years to come which means that any expected profits or gains will not be the same anymore.

Istanbul which is used to accept newcomers has always maintained an active movement of sale and in 2012 a new phase has started when a new regulation allowed the foreigners to own properties easily. This helped in increasing the number of real estate developments and reconstruction of old buildings. At the same time, the government supported several series of projects to build affordable housing that give the limited income people the chance to own an apartment. Those projects provided housing with minimum payments and installments that reached 10 or 20 years, and this contributed to increasing the population of Istanbul by 30% in the last 20 years.

In Dubai, the construction works rarely stopped in the last two decades depending on the fast increasing population and high demand for housing. Things were to be brilliant without the crises that appeared every few years like in the 2008 financial crisis, or in 2015 with the oil prices drop, or the recent COVID-19 pandemic. Along with the high cost of running a business in Dubai, this led to closing many businesses and lowered the demand for the city in general. As a result, the real estate market fell in trouble overwhelming support against the little demand.

Many factors affect and make the property prices in Istanbul and Dubai and they vary for sure from one location to another and project to another.

The cost of owning a property in Dubai

The cost of owning a property in Istanbul

Example: We will suppose a scenario of paying the service charges of a 100 square meter 2-bedroom apartment in Dubai and Istanbul.

Why chances are bigger in Istanbul?

The population of Istanbul is almost five times the population of Dubai. And we can see from the statistics that Istanbul had a yearly average of 100k sale for new units between 2013 and 2019.

Why it’s safer to buy in Istanbul?

Turkey is one of the top 20 country economies, its economy depends on agriculture and industry on the contrary of Dubai which depends on the services sector and tourism.

The major demand in the real estate market is local demand which guarantees you easier resell later.

Why it’s more profitable for you to buy a property in Istanbul?

Simply because, the property prices and service charges are lower, the demand is higher, and the ROI is higher.

Future of the cities

The new Istanbul Airport which started functioning last year is supposed to be the biggest in the world within a few years after completing its constructions and function in full capacity of 150 million passengers per year in addition to being a global hub for air cargo.

The new Canal Istanbul project will be a shift for the marine traffic passing through the Bosporus, the new canal will allow the passing of 50k commercial ships per year which is more than two times the ship’s numbers passing currently.

Istanbul has always been one of the best tourist destinations worldwide and numbers of its visitors are expected to increase more in the coming years.

On the other side, Dubai was expecting a lot of profits and benefits of the Expo 2020. Apart from the location of the exhibition itself, the city prepared many big roads, hotels, huge residential developments, especially for the exhibition. Almost everything that has been done in the city in the last few years was made for the sake of the exhibition somehow or taking it in considerations at least. COVID-19 pandemic came by the end of 2019 and the beginning of 2020 and messed up the whole world and hindered all the plans worldwide, which forced the delay of many exhibitions, conferences, championships, and all kinds of meetings.

All of us are hoping to get back to normal life as soon as possible, but it seems that COVID-19 effects will company us for a few years. This means even Expo2021 benefits or profits for the city will not be fulfilling what was expected from it. Other indicators in the city don’t show a big growth that is similar to the period previous to 2008 or as the city is usually marketing itself. The oil, transportation, and services sectors which are the main incomes for UAE in general are all facing big troubles that would affect the revenues for years.

In this article, we tried to spotlight some of the points that need to be taken in consideration before investing, for more information and details you can contact us or fill the contact form and we will contact you as soon as possible.

5 Cheapest Apartments in Istanbul for Sale
What to Expect When Moving to Turkey?