The “Yerebatan” one of the largest water reservoirs that were built under the old city of Istanbul, to provide fresh water to residents of the city and its army in a state of siege the city.

The history of the establishment of the water reservoirs, “Yerebatan” which is located in Sultanahmet near “Hagia Sophia” Mosque in Istanbul, before the Emperor Justinian the first, to the sixth century AD. 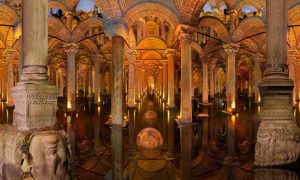 The purpose of the construction of this the reservoir is to provide water requirement of the city, with a length of 138 m, and width of 64.6 m, has been used in the reservoir 336 columns of marble supported by warheads and strong bridges, roof of the reservoir consisting of the arches which were placed without the use of templates,  the walls of the reservoir, which its thickness is 3.5 m were covered with a special material to prevent water leaking, and can contain eighty thousand cubic meters of water. 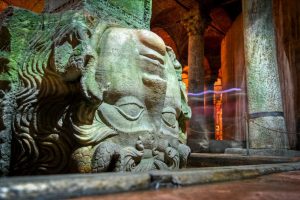 Long ago, there was a yard atop of the reservoir and it was paved with a stone, but as a result of the spread of the buildings starting from the Byzantine era to Ottoman Testament, the yard was subjected to a lot of vandalism over time, as the residents of the buildings were breaching the arches of the roof in order to withdraw water from the reservoir.

In 1940, the Istanbul Municipality had acquisition the houses who were built on it, and had established a structured building at the entrance to the area, in the years between 1985 and 1988 was conducted a wide clean-up operation for the reservoir, where it drove out tonnes of mud, and a walking area was paved on it. 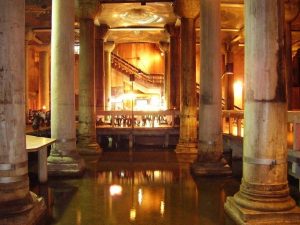 After completion of the cleaning of the reservoir, short columns were built in the southwestern section and put a pieces of marble rock of ancient archaeological which goes back to early times, which were called Medusa and Georgian eras. 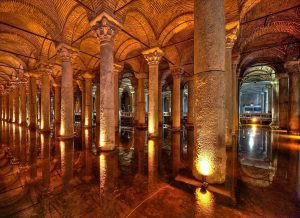