Properties for Sale in Fatih 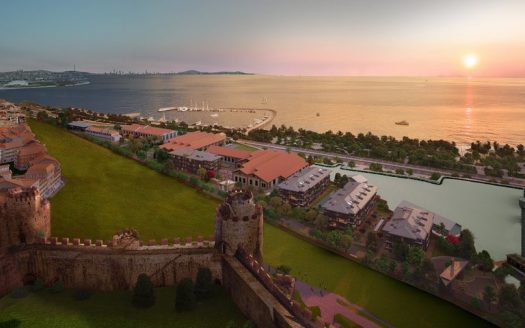 What Should You Know Before Buying a Property in Fatih?

Whether it is your first visit or a regular visit to Istanbul, for sure it won’t pass without visiting Sultan Ahmet Camii (Blue Mosque), Aya Sofia, The Grand Bazaar, Egyptian Market, or Eminonu coast.

Simply, whenever you come to Istanbul you would stay, spend some time, or at least pass by Fatih district. Because Fatih district or sub-municipality is including most of the historical Istanbul which is known as The Golden Horn and the neighborhoods inside the ancient walls of Constantinople.

Fatih is the most historical part of Istanbul and the most famous for tourists, in 2019 about 36 million tourists visited Turkey, and for sure all of them visited Fatih district at least once. This makes is it one of, or the most active part of the city.

The district of Fatih is full of archaeological sites and its museums are rich with founds from the Roman, Byzantine, and Ottoman eras. That made the UNESCO enlist the historical sites of Istanbul as a whole in the World Heritage List.

The Sultan Ahmet area is the most famous location in the Golden horn peninsula and in Istanbul in General, the area contains Hagia Sophia mosque and museum, Sultan Ahmet mosque, and Topkapi Palace.

The Grand Bazaar is the most famous traditional market in Istanbul which is known for being roofed, its big area, and its confusing lanes.

As the heart of Istanbul, the Fatih district had to be easily reached and well covered with transportations.

Three metro lines and two tram lines are providing transportation to and from the district in addition to many bus lines.

The M1 metro line is the most famous one as it was connecting the old Istanbul airport with Aksaray neighborhood in the middle of the Fatih district before extending the line to Yenikapi.

The M2 metro line connects the Fatih district with the other historical districts Beyoglu and Sisli and continues till Haciosman in the North part of Istanbul.

The Marmaray metro line is the most recent one, however, it became more important than the previous ones as it connected the European and the Asian sides of Istanbul through a below-sea tunnel which made reaching Uskudar and Kadikoy easier and provided a secure and faster alternative for the boats which used to transfer passengers between the two continents.

The T1 Bacılar-Kabatas tram line passes through the district of Fatih and helps in reaching the tourist locations.

The T4 Topkapi- Mescidi-Selam tram line connects The Gaziosmanpasa and Eyup districts with the Fatih district.

The district is still expecting a new tram line that will connect the Eminonu coast with Eyup and Alibeykoy neighborhoods.

Before being the biggest hub of metro lines in Istanbul, Yenikapi neighborhood had a very deep history that Archaeology founds caused a three years delay for the metro construction.

In the Fatih district, there are many Famous traditional markets with each has its own specialty and products like Grand Bazaar for jewelry and handcrafts, Egyptian Market for spices, Laleli for fashion and accessories, and in some markets you can find almost everything like in Eminonu.

Istanbul University which is the best university in Turkey has its main campus at Beyazit neighborhood in the Fatih district.

What Kind of Properties Can You Buy in Fatih?

The majority of the buildings have about fifty years old except for some restored or renovated buildings.

Although the Buildings are standing back to back, but each is a single building with four or five floors, narrow stairs room, and small-sized apartments.

Most of the district is reserved for being historical heritage.

Apart from some renovated or rebuilt single buildings, a few new developments are taking place in the Fatih district like in Topkapi and on the coast of the Marmara Sea.

Topkapi neighborhood is a connection point between the Fatih, Zeytinburunu, and Eyup districts, and it had an industrial area in some part of it for some time. Recently, a decision of renovating the industrial area had been taken which opened the way for new residential and commercial complexes to come instead.

Besides being in the heart of the city, the new complexes are providing modern type of residence with services and facilities like security, car parking, fitness center, swimming pool, and more.

Based on the needs of the city center residents, one-bedroom and two-bedroom options of apartment are more common even though bigger sizes are available.

The Fatih district is one of the most active parts of the city and many of its old buildings are being used for commercial purposes, however, the new complexes are providing the home-office type of properties besides the residential type, in addition to offices, shops, and stores.

What is the Price per Square Meter in Fatih?

The price range to be expected in Fatih is around 1000 USD to 5000 USD per square meter.

The Fatih district is the heart of Istanbul city. It is a place where you can get connected with a deep past of thousand years old while staying connected with the present and the future.

The variant transportations of metro, tram, buses, and boats are acting like the blood vessels of the body that carries life from and to the heart.

The traditional markets in the district are still providing their authentic products while adapting to the new century’s needs.

The Fatih district has many features and advantages that make it highly demanded as a residence or as a place for investment.

The central location where you are closer to all parts of the city, the various options of transportation to use, the beautiful views in some parts of it, and the lovely atmosphere created by the mosques and the historical buildings.

The high demand secures your investment in the Fatih and ensures higher income and returns.

How Can You Buy the Most Profitable Real Estate Investments in Fatih?

Although it's highly attractive, but buying in the Fatih district can be tricky especially for foreign investors. Having CCT Investments as your local real estate expert can save you time and efforts through your searching journey and ensure getting the best property for you.

By filling the inquiry form you make a big percentage of your share of the search process, while we would take care of the rest to get you the most suitable property options.