Properties for Sale in Basaksehir 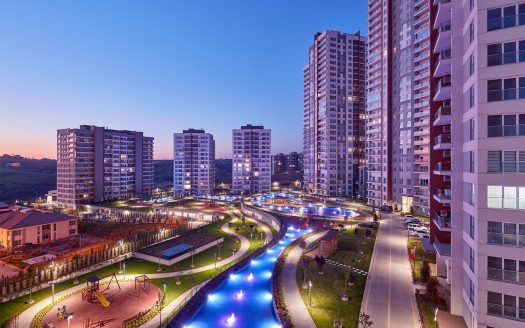 What Should You Know Before Buying a Property in Basaksehir?

Basaksehir is one of the new districts and sub-municipalities of Istanbul which was established less than twenty years ago, and now it is one of the biggest parts of the city in terms of area and population. Basaksehir has an important location which is almost in the middle of the European side of Istanbul and the closest to the new Istanbul Airport. Basaksehir is a neighbor of two important highways of Istanbul, the E80 highway which is an international highway connects the Turkish Bulgarian borders in the northwest with the Turkish Capital Ankara, and the O-7 highway also known as “Basin Ekspres” which is the main highway connecting the city of Istanbul with its new airport. These two highways are connecting Basaksehir with other parts and centers of Istanbul through cars and buses network. While the metro network is connecting a part of Basaksehir with the city center of Istanbul through “Kirazli-Metrokent” metro line, an extension of the metro line is being constructed to cover the newer parts of Basaksehir, in addition to the new metro line that is supposed to connect the city with the new airport from one side, and with Esenyurt and Beylikduzu from the other side.

A project of making a new sea path to connect the Aegean Sea and the Black Sea is launched in Istanbul and will pass in Basaksehir. The Istanbul Canal project will add more importance to the district of Basaksehir as it has the best location and ability to accept new developments related to the canal activities. Emlak Konut is a public sector developing company that was established about thirty years ago to provide solutions for housing problems all around Turkey. Emlak Konut was the first developer to start residential projects in different new locations in Istanbul with collaboration with the municipality and other governmental parts to provide a series of affordable housing projects for the people of Istanbul. As Basaksehir was one of the first targeted areas and locations for Emlak Konut, The trace of Emlak Konut is almost everywhere in Basaksehir with the multiple projects it has developed in cooperation with different construction companies or other developers. Emlak Konut became a trustworthy brand name for Turkish people due to its punctuality in delivery, good quality, and easy payment system. All the above-mentioned information make Basaksehir the undisputed next city center of Istanbul.

The Mall of Istanbul shopping center which is the biggest and the most famous in Istanbul is located at the connection point of the E80 and O-7 highways with Basaksehir district and is one of the most important attractive destinations in Basaksehir and Istanbul.

Botanik Park, is the name of the biggest public park in Basaksehir, with an area about 350 thousand square meters, the park is meant to be the natural escape and the activity center of the new city.

In this year 2020, Basaksehir is expecting the delivery and running of Basaksehir City Hospital which is one of the biggest Turkish medical establishments country-wise; with a capacity of approximately 2300 beds and variant medical sections and services, it is a healthcare city rather than only a hospital.

What Kind of Properties Can You Buy in Basaksehir?

As a new district, Basaksehir succeeded in attracting developers and grew fast in a relatively short time. Complex concept is the most common in the modern city of Basaksehir and this was started with the housing projects that were launched by the government to provide affordable housing for the young families in Istanbul.

Apartment options start from one-bedroom size and up to three-bedroom size are the most common in the complexes which are residential in general. Complexes would all provide some basic services like “24hours security by cameras, guards, and gates” and additional facilities like “gardens, swimming pools, fitness rooms, children playgrounds, Turkish Bath, Sauna and more”

Bigger sizes of apartments are available in less percentage in some projects in the form of flats or duplex apartments. While villa or townhouse options are relatively limited to few complexes of this type.

Shop options are available in the form of street shops mostly which are built below some projects and complexes, in addition to some small shopping centers.

Offices, stores, and workshops can be found in the industrial and commercial parts of the district, closer to the E80 highway and the Mall of Istanbul shopping center.

What is the Price per Square Meter in Basaksehir?

Basaksehir has a big area in total as a municipality, it has been developed in different phases. A big part of the district which is closer to the E80 highway is taken for the industrial area and the residential parts start to the north of it.

The different phases of the residential part of Basaksehir were developed over several years which made some small quality gaps between phases as many factors were improving by time.

Some other factors may affect the price like the quality of the project facilities, the floor hight, or the developer reputation.

How Can You Buy the Most Profitable Real Estate Investments in Basaksehir?

When you buy a property in Basaksehir now, you book yourself a place in the future city center of Istanbul. If you are searching for a residential apartment or a villa you only need to follow your feelings and buy where you feel more comfortable, but if you are looking for an investment opportunity you might need help from a local real estate expert like CCT Investments to guide you in choosing the most profitable property.